Well, I just decided to pop back online to write in this poor, neglected, pictureless(dagnabbit!) blog, and I realize that it's nearly been a month since I wrote anything in here!  And no doubt I've experienced plenty of new things during my trip abroad.  I apologize, my poor, poor empty blog!

Anyways, as I really do not have the time to post any lengthy posts about how the last month has been in Japan, (ehehehe.  I'll try to do more when I get my camera card reader, geez! -_-) I decided to share my report on Ikumen with you. (whoever "you" may be, if there's anyone actually bored enough to go on my blog...)

As a way to interest some potential readers: 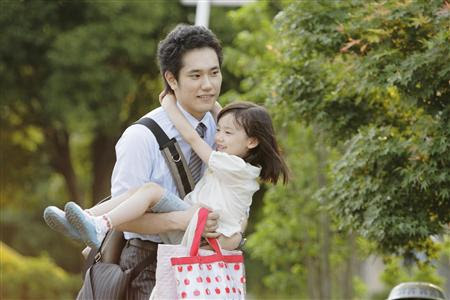 Come onnnnnnn~!!!  You can't deny the cute that is a man and his love for his children!

Anyways.  Continue to read for the report, Kay?


Ikumen.  The term is a relatively new word defining the trend that has been blooming in more recent years in Japan.  Essentially it blends the idea of work and family in an attempt to create a type of balance between the two that may soon replace the “ideal” Japanese family.  This is particularly focused towards men, who, for many years have lived with the idea of work, work, work.  Ikumen plays with the idea of allowing men to have more time for their family, particularly their young children, to actively play a role in maintaining the family unit at home.  The bloom comes from the wave of a new age, where younger men see the long hours that the older generation put into work was meaningless because they do not have time for the family.  The trend can be seen all around Japan.  Companies are now actively trying to encourage men taking a more family oriented role as a way to better Japan and encourage work-life balance.  Stores are stocking up on items more fitting for males who are taking care of children.  Yet while this is so, accepting ikumen as a social norm may still be many years away for the conservative Japanese who are often against those going against the crowd and are still lagging in bridging the gender-gap.  Many men hesitate to ask for paternity leave or time off to spend with the family because of strong peer pressure not to do so, even if they have the right and the ability to do so.  Regardless, the fact that ikumen are steadily gaining a known place in society, and with help, it may one day become something normal and accepted in Japan.
The word “ikumen” is still a very new term, coined by a copywriter combining the Japanese word “iku-ji” (parenting) and the English word “men.”  In the past the “ideal” family was one where the fathers took the role of bread-winner, bringing in money, while the women basically gave up their careers and stayed at home raising the children.  Ikumen are men that are more willing to be involved with the child rearing process, which includes spending more time at home and effectively taking a more active role in bringing up their children.  It may sound like a clear role-reversal at first, where the man stays at home and cares for the children and house, and the woman goes and brings home the money, but this is not the case.  Ikumen still work, they just take more time for their children and family.  With issues such as a declining fertility rate and the strongly connected desire for a type of work-life balance, the wave of ikumen coming has been seen as a possible method of at least stopping the declining birthrate.  As such, even companies and the government are getting involved with supporting the men now wanting to take paternity leave.
The bloom of ikumen is a very slow one.  According to the Japan Times, in 2004 the Ministry of Health reported that 0.56 of men took leave to care for their children.  It was after Yamada Masato took child leave that this number began to increase.  Yamada is an ideal role model for ikumen because of his position.  He was the first male bureaucrat to take leave to care for his children.  He and his wife Atsuko, who was also a bureaucrat for the Ministry of Economy, Trade, and Industry, just had their third child when Atsuko told him that she would not be able to manage taking care of all three children and doing her job.  He stepped up to the plate and took a year of leave to help care for the children.  In the years following, magazines and seminars were created in an attempt to encourage those wishing to take the time to take care of the children and finally in 2008, 1.23 percent of males were found to have chosen to take some form of leave.  While it is not a ground breaking amount, it is still significantly larger than it was in previous years.  Yet the fact that such a small amount of men actually took leave seems to hint at strong reasons why they choose not to do so.
According to more recent data from a survey conducted by Benesse in 2006 about Japanese father’s views on childrearing, while approximately 25.4 percent of the men surveyed wanted to take child care leave, only 2.4 of them actually did.

In another survey, the reasons why they chose not to becomes more clear.  The next survey asked men to choose the three options most fitting as reasons that they did not take child-care leave.  The three most popular results were as follows:
1. “I did not want to cause trouble to the company.” (31.2%)
2. “I was too busy to take child-care leave.” (31.0%)
3. “There was a lack of precedent.” (24.5%)

As the results clearly show, the largest factor in a man’s choice to take child-care leave lies strongly in the company.  All three of the top results clearly show that there is something lacking in the companies, be it through the lack of support or precedent, or the general atmosphere that by taking leave, they would be burdening the company.
This is not a unfounded thought.  There have been a few cases where men who chose to take leave have faced issues in their company.  Companies have been sited for firing their workers for taking child-care leave.  And though not quite as severe, in one case, a man who took time off to help his wife take care of his newborn children went back to the company to find that his ranking had been dropped from a C rank to an E rank.  Even still, there are also other reasons that men choose not to take leave.  Taking leave to help raise the children is still not acceptable in modern Japan.  Many of the men who chose to do so faced rejection from their peers.  Thus it is not just worries about the company that men are faced with, they are also faced with the task of fitting into the social roles that have been laid out for them.
So how can these negative views be changed?  It has been shown that social media has a strong grip on how people view many issues.  Messages that are shown in the media often develop into social norms that are acceptable to the general public.  Ideas such as the appropriate weight to be, appropriate reactions or mannerisms, and even popularity are greatly influenced by what the media chooses to portray.  This is true in the case of ikumen as well.  The government took a more active role in 1999 when they expressed their view that men should help out more around the house.  There was also the release of television ads that expressed the striking message that “A man who does not help raise his children cannot be called a father.”  In more recent years, stores have been bringing in items that aid men taking an active role in caring for their children are appearing.  One company, Combi which specializes in childcare items, created several new lines of child care items including strollers with handles made for men and more appropriately colored diaper bags in early 2008.  While so far the effects are marginal, through continuing such use of media, there is definitely some change in views.
The Ikumen Project, launched in June 2010, is a more recent project created by the government, or more specifically created by the Ministry of Health, Labor, and Welfare.  In this project, Men are encouraged to take leave from work to take care of their children.  It is an attempt to support the blooming ikumen while also serving as a means of not only decreasing the gender gap, but also stopping the downward slope of the fertility rates.  The Ikumen Project works to create policies that give men a chance to have a more flexible and supportive environment in their companies.  As it is, many men do not get paid leave to take care of their children, and leaving work to raise their children often leads to less pay, a lower ranking in the company, a harder time getting a promotion, and sometimes even getting fired.  Companies, such as the Sumitomo Corporation, are now joining the Ikumen Project to support the ikumen.  If companies continue to join and make work more supportive for male parents, then a good child-care system may soon be established, allowing men to feel more secure about taking time off without facing repercussions.


I swear when I get my camera card reader, I'll post more interesting things, with pretty pictures!  I have plenty~! And lots to talk about too!  Until next time.

Leave me a marshmallow?

Mirruchan
I'm female and interested in males. 5'4". Long hair, still growing, I would hesitate to say "wavy," it's more of a "frizz wave". Both my eyes and hair are a dark shade of brown. Looking back on before I came to Japan, I feel that I was a chubby female, who ate too much junk. Here in Japan, I've lost a lot of weight, and am still looking to lose more. I feel that I am moderately fit and not overweight. My favorite food is an artichoke I am really pretty good at games but am also good at school. Gawd I sound so unattractive...... Oh I'm a half mix-Euro and a half Japanese mutt 'kay? Contrary to the anime stereotype, mixed Japanese people are not blond. I love role playing games and chivalric characters like Cecil from Final Fantasy IV. I adore Yuri Lowell from Tales of Vesperia, as well as his (boy)friend Flynn.